Dare to truly disconnect traveling to this unique destination, where you will only relax and enjoy the peace that the landscape and the impressive nature offers you. In this paradise made up of more than 1,000 islands, you will feel like shipwrecked on a deserted island, but with all the luxuries and comforts. There are as many islands as dream resorts, but there is one that will come to you as a ring to your finger… Here we enter, at Next Destinium we are specialists in designing you the perfect trip. Welcome to the Maldives Islands!

GET INSPIRED BY OUR 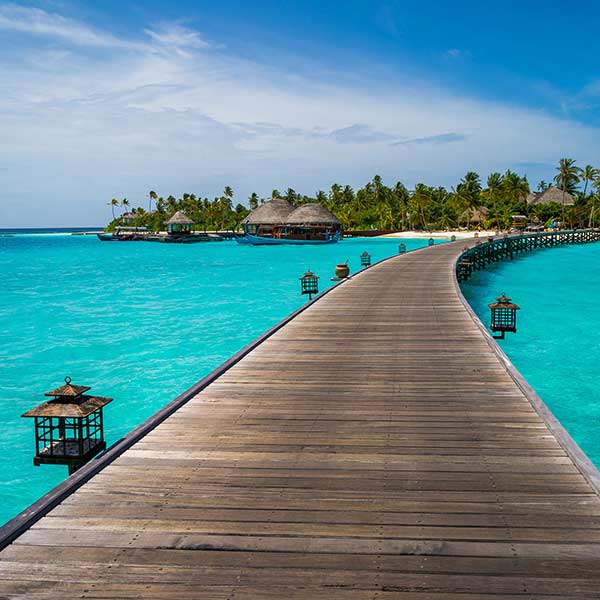 Honeymoon in Maldives adults only

CABINS ON THE SEA, CRYSTAL CLEAR WATERS, POSTCARD VIEWS, FISH OF A THOUSAND COLORS, MAGICAL SUNSETS, DESERTED BEACHES, QUALITY FOOD, UNPARALLELED LUXURY. MALDIVES IS A STAR DESTINATION TO ENJOY A MOVIE HONEYMOON, WHERE EVERYTHING AROUND YOU IS PERFECT AND SPECIALLY DESIGNED TO PLEASE YOU TWO. 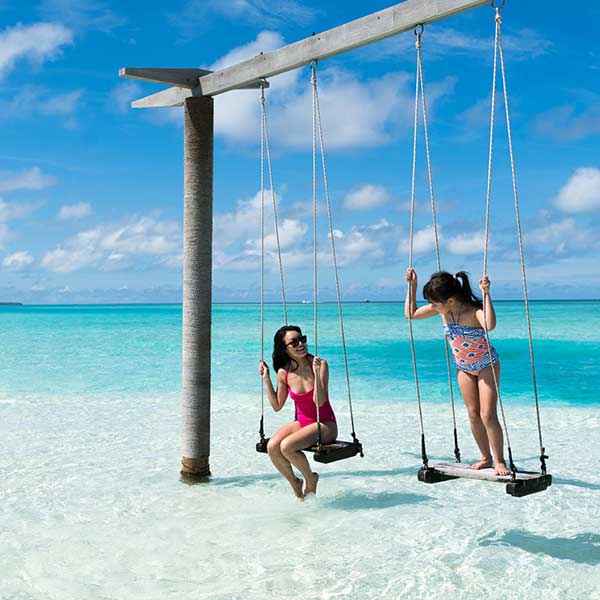 THERE IS NO BETTER PLACE FOR LITTLE ONES TO BE FASCINATED BY THE MARINE WORLD LIKE THE MALDIVES. WITH CRYSTAL CLEAR WATERS AND PALM TREES, CHILDREN FEEL LIKE MERMAIDS OR PIRATES, LIVING A DREAM COME TRUE. LUXURY AND COMFORT MERGE TO ENJOY MOST OF THE DESTINATION. 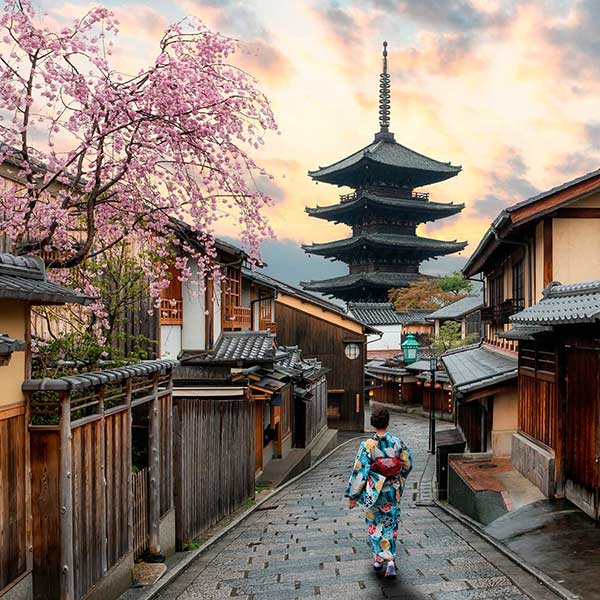 ENJOY A HONEYMOON TRIP WITH THE BEST OF JAPAN COMBINED WITH MALDIVES ISLANDS. A CUSTOM HONEYMOON WHICH COMBINES THE RELAX AND WELLNESS OF THE BEACHES, SNORKLING AND WATERS OF MALDIVES, ALTERNATED WITH A TRAIN JOURNEY THROUGH JAPAN SEEING THE BEST TEMPLES AND ENJOYING OUTSTANDING TYPICAL RYOKAN JAPANESE ACCOMMODATIONS AND LOCAL RAMEN GASTRONOMY.

The Maldives is a country in the heart of the Indian Ocean, south-west of Sri Lanka and 450 km south-west of India. Its territory is organised into 26 atolls, the only visible surface of the peaks of the volcanic mountain ranges of islands that are currently below sea level. Coral reefs grew around the round cones of the volcanoes. For this reason these atolls normally have a circular structure, something that you will contemplate from the height of the plane, an impressive and unique view. In addition, the atolls of the Maldives are among the largest and considered an example for the world of geology.

The territory has a total of approximately 1,200 islands with white beaches surrounded by palm trees and wonderful lagoons, however, only 220 of them are inhabited, either by the local inhabitants or for tourism. The Maldives is one of the Asian countries with the least population as of extension, it is also considered the “lowest country in the world”, since its maximum altitude is the lowest in the world, about 2 m, this means that only 1 % of the country’s total area is located above the sea… impressive, isn’t it?

Malé is the economic and political center of the Maldives, your starting point if you travel to this region because the airport is located on the island of Hulhulé that is connected to Malé, Basically Malé is a tropical island of 1.5 km² characterised by its great activity, with ports full of boats, fishing, goods and collective transport, strident markets, shops and a pleasant social life in the streets. It highlights the cultural mix created by the diversity of residents and tourists from around the world, and above all marks an abysmal contrast with the calm in other islands of the Maldives.

The culture in each area of the Maldives is homogeneous, but at the same time a little personal. The Maldivians are of Muslim religion, their language is divehi, and in general they are very kind, attentive and honest, characteristics that pleasantly impress the tourist. They are expert navigators, because the country is made up of 99.5 % water and therefore the sea is the protagonist in its day to day, sailing with its traditional boats, the Dhonis.

Another very common means of transport is the seaplane, which is mostly used to reach the resort from the airport. Climbing on these iconic seaplanes in the Maldives is a total adventure in itself, not to mention the views. Sometimes where the resort is located at a distant point it is necessary to take a domestic flight followed by a speedboat.

All of these holidays are real travel suggestions tailor-made by our specialist consultants to meet the personal needs of our clients. We are Destination Specialists in exclusive and tailor-made travel, your holidays will be as similar or different to these travel suggestions as you wish. You will enjoy the best experience of your life if you put yourself in our hands because we customize your holidays just as you wish. And no one knows more about how to enjoy Maldives than we do.

Why travel to Maldives with Next Destinium?

The Maldives is a very attractive and popular destination for diving through transparent waters with a trembling temperature and a varied underwater world that fascinates anyone. This destination has 25 natural marine reserves accessible to divers, created by the government with the aim of protecting nature and stimulating its regeneration. These reserves consist of coral reefs, thilas and reef channels. Corals have formed extraordinary reefs and atolls in the middle of the ocean that make each dive an unforgettable experience. Depending on the time of your trip you should go to one area of the country or another, for example, from May to November the conditions are ideal for diving west of the atolls, but if you are going to travel between December and April it is most advisable to go east of them. At Next Destinium we create the holidays with best selected accommodation according to the aim of the trip: The scuba diving. We will offer you the perfect diving center for you, strategically located, with dives to sites thinking about your experience and level. You can dive with tranquility and total security. If you are interested we also offer the “marine safari”, an unforgettable experience aboard a luxurious boat, ideal for enjoying different points and diving sites. What we want is for you to discover the fascinating underwater world of the Maldives at first hand. You will immerse yourself in the water to admire the thousands of underwater inhabitants of the Maldives Islands such as crocodile fish, sailfish, flute fish, brunette, napoleon fish, lionfish, black marlin, stone fish, trumpetfish, dolphin, barracuda or the hawk turtle. Also larger aquatic species such as the famous whale shark, a harmless fish that can measure up to 15 m and which is mainly concentrated in South Ari Atoll. Also the mantaraya, the white-tipped shark, the zebra shark, the gray shark, the hammerhead shark and the black-tipped shark. Did you know that some specimens are not yet identified? Maldives counts with an impressive world to discover.

The Maldives is the preferred destination for many couples to enjoy their honeymoon. We have the best resorts for adults, exclusive rooms, privacy and the best gastronomy to really feel special. Holidays designed with all the details to please all your senses. One thing that surprises the traveler is the variety of resorts and hotels in the Maldivians, but that is no surprise given that there are many islands. Although onlyadults resorts tend to look pretty much, each one has something special that will suit your dream resort.

Do you know it’s a glampingexperience? In the Maldives there is the option of sleeping under the stars on a small private island just for you and your partner… a unique experience in life where luxury and contact with nature will make this evening the most romantic night of your lives. This original option is complemented by a delicious dinner with the sunset of bottom heel, the gentle sea breeze and endless sails and lights so you can stroll around your island in total comfort.

Some atolls in Maldives

One of the most famous atolls is the North Malé Atoll where the capital of the archipelago and the most touristic islands are located, with a variety of famous hotels and a very good infrastructure. The locals do not abound in this area, because of tourism, housing prices are very high. It is noteworthy that thanks to a strait the North Malé Atollis well protected from monsoons, a positive development in the development of fishing areas, and that reassures divers who are on holiday.

South Malé Atoll is separated from the North Malé Atoll by the Vadu Canal. In the three islands of this atoll the indigenous population abounds, as on the main island of Maafushiwhere ancient culture and traditions are preserved. Another island is Guraidu, with alleys full of souvenir shops. In addition to the third inhabited island, Gulhi, this atoll has many vacation islands and other uninhabited islands. The South Malé Atoll is excellent for snorkeling and diving thanks to the great visibility underwater, where you can see wonderful corals, some still intact, multicolored fish banks an impressive flora. The most famous diving areas are Coral Gardens, Vaadhoo Caves, Cocoa Thila or The Canyon.

Ari Atoll is one of the largest atolls in the Maldives with more than 100 islands and is particularly prominent in tourism. In the north there are ideal islands with luxury resorts and hotels, while most inhabitants, following the norm, live on the southern islands. As for diving on the west side of the atoll you can see numerous stingrays and whale sharks. To fully enjoy this underwater paradise, the key points are Broken Rock Thila, Omadhoo Thila, Kudarah Thila or Tinfushi Thila.

Only 3 km from the North Atoll is the small Gaafaru Atoll, which has the islands of Gaafaru, where 1,000 inhabitants live and the main economic sector is fishing; And Velifaru, with a singular reef, where to explore shipwrecked ships.

If your aim is to dive in an environment away from tourism it is recommended to visit Felidhu Atoll, where tuna fishing is one of the main activities of its hospitable inhabitants. There are numerous small and uninhabited islands in the center of the atoll that invite to be explored and in the south the reef of Vattaru, perfect for diving, with lots of remarkable fauna such as grey sharks, whale sharks and stingrays. In general its reefs are famous for their depth in the sea, where one can make fascinating dives, as in the area of the Fotteyo Kandu.

Near this atoll is Vaavu Atoll, where only a third of the 35 islands is inhabited by very few people, almost as if they were a tribe. The island of Muli is considered the most important of the atoll along with the Kolhufushiand Mulaku Islands, where fishing is practiced and cultivated yam, a tuber. However, we must emphasise that in the Maldives, arable land is minimal and most food is imported. Small amounts of coconut, millet, sorghum and corn are also grown.

The Maldives is a destination where the water and the sea are everything, for this reason you can do as many aquatic activities as you want. There are resorts that are more suitable for relaxation and others more dedicated to action. You can do Paddle Surf or go by canoe enjoying the landscape and the turquoise waters. Feel the rhythm of the waves and the sea breeze performing Windsurfing or unloading adrenaline with jet skis. If you dare you can experience the so-called waterskiing, a very fun water sport. Some resorts also feature a Fun Tube, a float attached to a boat that will make you fly or the Kneeboarding, where a surfboard is towed. As you can see there are thousands of options, but a unique activity that can not miss is to sail by boat, either by catamaran or the typical “Dhoni”, during the day or even at sunset, while enjoying a romantic dinner and a good champagne accompanied by an idyllic orange sky.

And what about flyboarding? This extreme experience is a full-fledged adventure, you will be propelled into the sky and feel like never before, flying high enough to see the almost entire islands.